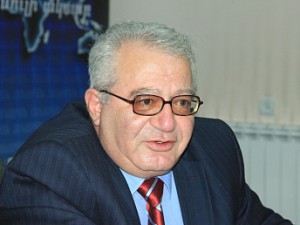 Armenia should increase exports of its agricultural products to 50% of the volume of production, declared head of the Agrarian-Peasant Union of Armenia Hrachya Berberyan at a press-conference in Yerevan. This figure is unrealistic for Armenia. But half of the announced volume should be taken into account, — says economic commentator Simon Yepiskoposyan. “Armenian businessmen, engaged in the realization of agricultural products in Russia, may assist in this,” told RUSARMINFO the Russian expert. According to him, there’re different political factors in Russia, inevitably impeding the increase of the share of Armenia in the vegetable market.

“The largest fruit and vegetable bases of Russia are in the hands of Azerbaijanis. They cooperate with the majority of importers. Azerbaijanis will not allow storing products from Armenia at their bases,” noted Simon Yepiskoposyan. Armenian cheeses have received “Carte Blanche” on the Russian market: according to the official data, over the past 1.5 months Armenia has already supplied to Russia 408 tons and 757 kilograms of cheese. However, this is only a small part of what Armenian producers are capable of. “Armenia can export at least 3 times more. But two main factors interfere. First, the expensive transportation issue, and second, the absence of links with Russian retailers. Still Armenians are not able to negotiate with them,” stressed the expert. Referring to Yepiskoposyan, the preferences in the framework of the EEU are important factors in increasing exports, and this will give impetus to the growth of trade relations between Armenia and Russia. According to the National Statistical Service of Armenia, the volume of agricultural production in Armenia in 2015 increased by 11.7% compared with the previous year. In 2015, 76 thousand tons of vegetables and fruits were exported, an increase of 65.9% in comparison to 2014.