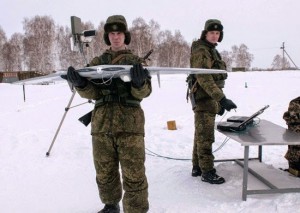 According to the press service of the Southern Military District (SMD), the Russian military base in Armenia has received unmanned aerial vehicles (UAV) «Tachyon».

«Modern UAVs “Tachyon” are used in the interest of military intelligence in the daytime and at night at distances up to 40 kilometers in a variety of adverse conditions in the wind, reaching up to 15 meters per second,» – reports the SMD press service.

Within one month, the Russian military will be trained to work with new UAV complexes in the high ranges of “Kamhud” and “Alagyaz”.

Earlier, the press service of the Southern Military District reported that in the second half of 2016 on the Russian airbase in Erebuni (Armenia) would be set a new batch of multi-purpose light front-line fighter of fourth generation MiG-29 and a transport helicopter MI-8.