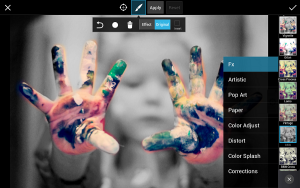 Multifunctional editor — mobile application PicSart is included in the list of «the hottest startups in 2015” by Forbes. According to Forbes, the Armenian application is already worth $ 250 million.

Currently, there’re more than 250 million users of PicSart worldwide. This is the most well-known program, created in Armenia. The number of employees exceeds 100 people, 20 other developers have joined the Armenian company from the U.S.

With this program you can take photos, apply various effects, masks, frames, borders, write texts, add comments, adjust color and more. The tools for drawing such as a variety of brushes, pencils are also designed. One can share the result in Facebook, Twitter, Flickr, Picasa, Dropbox, Fouresquare, Tumblr, Blogger, send it via SMS and email.

Note: PicsArt was launched in 2010. In January of 2013, it appeared in the Apple App Store, becoming one of the most popular free applications. Later the app became available for Android.