RUSARMINFO has received the official comment of Vice-Speaker of Russian State Duma, «A Just Russia» faction MP, Nikolay Levichev on the bill in regards to the Armenian Genocide in the Ottoman Empire.

RUSARMINFO: What are the chances of the bill, criminalizing the denial of the Armenian Genocide, to receive approval? 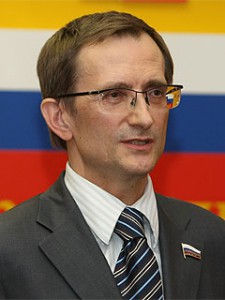 Nikolay Levichev: One should not entertain any illusions — such laws are never adopted «on the fly». But for the more favorable conditions for its introduction we would have to wait until the next anniversary.

Let me remind you that on April 24, Russian President Vladimir Putin took part in the ceremonies, dedicated to the Genocide of Armenians. By the way, shoulder to shoulder with Francois Hollande. Russia at the highest level gave its assessment of the bloody events of a century ago. On this issue within the Russian society there are no polar opinions, so the adoption of this bill, I think, is a matter of time.

However, it is now clear that the discourse of the bill will cause a discussion not only within the walls of the State Duma. Some colleagues from other factions have expressed the view that criminalizing the denial of genocide is an excessive measure. But the degree of the Russian-Turkish relations – be it «warming» or «cooling» – affects the final result in the least. The common sense will win sooner or later, the memory of the tragedy of 1915-1922 will be protected by the law, as happened with the legal protection of the Nuremberg judgment.

RUSARMINFO: Why is the bill proposed now?

Nikolay Levichev: Of course, the topic is not taken from the ceiling. It is well known, its public discussion has reached a filament in the current year of 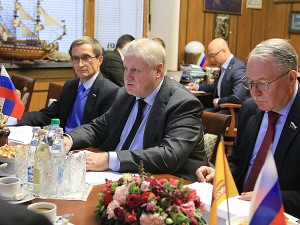 the centenary of the Armenian Genocide in the Ottoman Empire. Even before the 2015, the “A JUST RUSSIA” party held a major international conference on the issue of genocide. In April, the lower house of Russia’s parliament adopted a statement in which it expressed its deep sympathy with fraternal Armenia and at the same time called on the international community to ensure that international disputes were resolved through negotiation and not war. In April, the State Duma delegation, headed by me, participated in ceremonies in Yerevan and Moscow.

Therefore, the introduction of a bill criminalizing the denial of Armenian genocide is a link in the chain of events of the year; first of all, it is another reminder of the need to restore the historical justice. At the same time, the international situation, certainly, influences the making of the legislative initiative. The actions of the terrorist group «Islamic State» now have a number of signs of genocides: massacres of infidels, destroyed Christian holinesses, extensive propaganda of terror by information resources, aimed at psychological suppression of all dissent with radicals. If we do not give due attention to the facts of the past to defend the historical truth, we are doomed to repeat the bloody events. Note: The introduction of the bill on responsibility for the non-recognition of the Armenian Genocide by Turkey in 1915, announced on his Twitter page Sergey Mironov, «A Just Russia» political party leader.