Azerbaijan banned Russian aircraft to fly across its territory 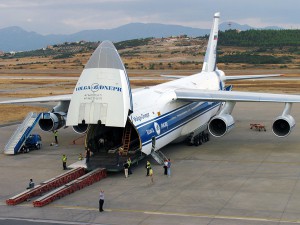 On November 15, the Aviation Service of Azerbaijan banned the span of the AN-124 Russian airplane, taking off from Armenia.

The heavy transport aircraft An-124 named «Ruslan», which took off from the airfield in Gyumri in Armenia, heading to Russia, shortly after takeoff was forced to return to the airport of departure, as Azerbaijan had banned the entry of the aircraft into its airspace, reported Razm.info military portal.

The record radio transmission from the pilot of the aircraft with the dispatcher in the airfield in Gyumri is published. On record the pilot reported that he was forced to return to the departure aerodrome as the «military sector of Azerbaijan has forbidden the entry to the zone.» There are no official comments on the incident yet.

Note: The 102nd Russian military base is located in Gyumri, and the logistics are carried out mainly by air.