Serzh Sargsyan is the most unfortunate among EEU presidents 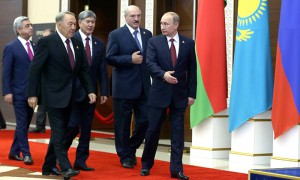 In this image the leaders of the Eurasian Union are greeting each other, but even in such a positive state of mind a person’s face can tell a lot about him.

To measure the level of happiness of the five presidents of the EEU the RUSARMINFO correspondent has applied to the artificial intelligence. According to the analysis, Alexander Lukashenko is happy for 100 percent, Nursultan Nazarbayev shares 99 percent of happiness, and the happiness level of the Russia President is almost equal to the level of credibility of the country — 86 percent. Vladimir Putin is followed by Kyrgyzstan President Almazbek Atambaev who has gained 85 percent of happiness. The most unfortunate among colleagues is Serzh Sargsyan, President of Armenia: his score of happiness is 83 percent.

Note: The tool to measure the level of happiness is in the public domain: Microsoft’s artificial intelligence is created to analyze the emotions in images, included in the set of Project Oxford online tools. To find out what percentage of happiness displays out your face, you need to drag your photos into moodmeter.