Obama will try to incite Turkey against Russia 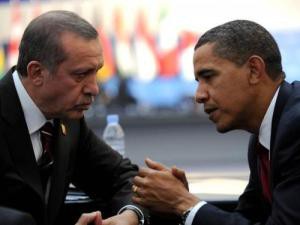 The White House reports that Barack Obama during his international tour from November 14 to 22 will visit Turkey, the Philippines and Malaysia.

During the trip, the American president will visit the G20 summit in Antalya, Turkey and the summit of the Asia-Pacific Economic Cooperation in the Philippines.

It is unknown whether the bilateral meeting will be held between U.S. President Barack Obama and his Turkish counterpart, Recep Tayyip Erdogan, however, in the context of the Syrian crisis, Obama’s Turkish voyage has a special importance.

The purpose of the U.S. president is to achieve a more assertive position in Ankara in regards to the Russian air strikes on the Syrian territory, — says Leonid Gusev, PhD in historical sciences, senior researcher at the MGIMO.

«In Turkey, Obama, first of all, will raise issues relating to Syria, and Turkey’s role in the Syrian crisis. In addition, the American president will try to persuade Erdogan to strengthen the Turkish military presence in Syria. For example, start military air strikes against the “Islamic state,”” said Gusev in his interview to RUSARMINFO.

According to the expert, one of the main objectives of Obama is the coordination of the Turkish-American policy in the Syrian issue, as opposed to Russia.

«Turkey has long been a member of NATO and a close ally of the United States. In the last 10 years, Russia and Turkey have established dynamic economic relations due to the large numbers of tourists from Russia and cooperation in the energy sector. But from the military and political point of view, Moscow and Ankara have different goals, and sometimes they occur in an open confrontation against each other,» notes Gusev.

Note: In recent years, the relations between the U.S. and Turkey have deteriorated: they can not reach a compromise on a number of regional and international issues. The differences are so significant that Barack Obama even refused to meet with Erdogan at the UN General Assembly in New York in late September of 2015.