The Armenian Church in Moscow brought together world-renowned scientists

Oct. 23, 2015 — At the Moscow temple complex of the Russian and New Nakhichevan Diocese of the Armenian Apostolic Church kicked off a two-day international conference entitled «Genocide as a spiritual and moral crime against humanity.» To participate in the conference tens of well-known scientists from 18 countries of the world have come to Moscow. The participants’ list also includes representatives of world religions organizations in Moscow, prominent figures of culture and art, politics and diplomacy.

At the grand opening ceremony of the conference, the participants were welcomed by the head of the Russian and New Nakhichevan Diocese of the Armenian Apostolic Church, Archbishop Yezras Nersisyan. He read out the message to the conference participants of the Supreme Patriarch and Catholicos of All Armenians Garegin II.

«If the great powers in time stopped the hand of the executioner, mankind would not say the word «holocaust» and would shudder from the massacre on ethnic grounds in different parts of the world,»- stated in the message His Holiness Garegin II.

Then the chairman of the Moscow Patriarchate Department for external church relations, the Russian Orthodox Church, Metropolitan Hilarion addressed the conference participants.

«In the XX century the world was destined to go through dozens of revolutions, wars and lethal epidemics, Fascism and the Holocaust, the bloody repressions, the nuclear attacks on Hiroshima and Nagasaki, the mass extermination of human beings in Cambodia and Rwanda. However, at the source of these huge upheavals is precisely the tragedy of 1915, which then the humanity tried to forget and not take appropriate lessons,» – said Metropolitan Hilarion. 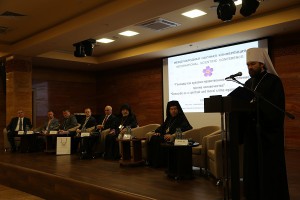 The first plenary session was opened by Director of the International Institute of Management at the MGIMO, Robert Yengibaryan.

«It is not correct to differ genocide victims based on their ethnic origin, a crime against humanity is monstrous in all countries. We must not forget these events, because they are a lesson for us and our future generations, «- said Yengibaryan.

Non-recognition of the Armenian genocide, «the fact that does not cause the slightest doubt,» led to the fact that many countries have lost their moral values, — noted in his speech the director of Middle East Institute, Yevgeny Satanvosky. 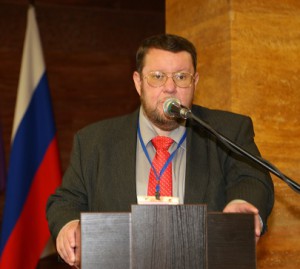 «The non-recognition of the Armenian Genocide has led to what is now doing in Syria the «Islamic State”, funded by Turkey, Saudi Arabia and Qatar, carrying out the genocide of the XXI century,» — said Satanovskiy.

Turning to the counterparts from different countries, the director of the Museum-Institute of Armenian Genocide, Hayk Demoyan among the conducted in 2015 events to mark the 100th anniversary of the Armenian Genocide, stressed the special importance of the Moscow conference.

Note: The International Conference «Genocide as a spiritual and moral crime against humanity» is organized by the Center for Armenian Studies of the Russian and New Nakhichevan Diocese of the Armenian Apostolic Church in conjunction with the Museum-Institute of Armenian Genocide.