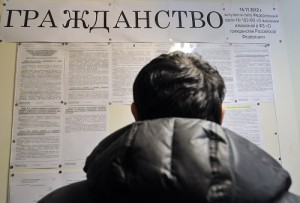 The Russian government has decided to increase the quotas in 2015 for foreign citizens and persons without citizenship to obtain permits for temporary residence in the Russian Federation. According to the press-release posted on the government website, the quota is increased from 128 055 to 151 175 people. «This increase is due to the high number of Ukrainian citizens, forced to leave the territory of the state, who want to live in Russia and obtain temporary residence permits for this,»  as stated in the release. The press service of the Russian Federal Migration Service has informed the RUSARMINFO correspondent that the increase in the quota concerns not only the citizens of Ukraine: all foreigners without exception can apply to this. «There is no delineation. The quotas are increased for all foreign nationals wishing to receive a temporary residence permit in Russia.» Note: The proposals for a further increase in the quotas were submitted by the public authorities of the 38 Federation subjects, of which 22 have already consumed the quotas by 70-100%. As of July 1, 2015 in Russia as a whole the quota has been used up by 55.3%, and in 19 subjects of the Federation — by 80 — 100%.