Главная / Без рубрики / From words to deeds: Turkey has sent troops to Syria. Will Russia intervene?

From words to deeds: Turkey has sent troops to Syria. Will Russia intervene?

According to the Radio France International (RFI), the first military units of the Turkish army are already in Syria. The Turkish military have taken up positions near the Syrian town of Azaz.

In the conversation to the RFI 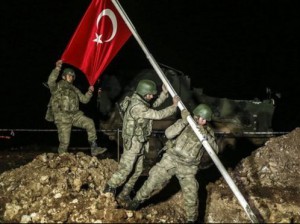 correspondent this information was confirmed by one of the officers of the Syrian opposition group of «Islamic Movement of free people of Sham», established by the Turkey armed groups. According to the military, at the moment about 300 people and 15 tanks have arrived to Syria, but the total number of forces can reach five thousand people.

«The U.S. and Turkey say that they’ve created the «security zone» in the territory of Syria to reinforce the fight against the Islamic state, but, in fact, in this area will be formed and armed militias fighting against the Syrian leadership. In such a situation it is difficult to predict the possible developments,» has said in the interview to RUSARMINFO Boris Dolgov, PhD in historical sciences, senior researcher at the Center for Arab and Islamic Studies at the Institute of Oriental Studies, the Russian Academy of Sciences.

Despite the small number of troops — it is an open military aggression against Syria, which involves the United S 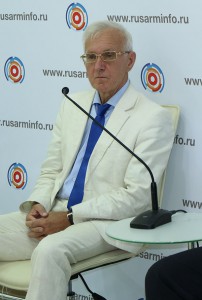 tates, says Dolgov. The Syrian leadership has protested against the actions of Turkey and the United States: for the moment in the area of ​​invasion the movement of units of the Syrian army is observed.

«If in the near future Syria takes retaliatory actions, then we can talk about the beginning of a new war. The world leaders, including Russia, must take steps to prevent such a course of events. This situation may well be the beginning of large-scale military action, not only between Syria and Turkey, but also in the whole region,» explains the analyst. According to Dolgov, Russia as the main ally of Syria, of course, will support Damascus by increasing the amount of supplied weapon

s as a kind of aid weapons, and sending military trainers to Syria. Parallel to the invasion of troops, Turkey has closed its border with Syria, not allowing refugees to move peacefully into its territory. «Turkey’s policy with respect to the civilian population is absolutely monstrous, and it should be condemned by the world community. Ankara is responsible for the suffering that it is causing in relation to the civilian population in Syria. This issue should be included in the agenda of the UN. Turkey’s policy, especially now, is very aggressive, and developing an adequate response is in the interests of Russia,» concludes Dolgov. Note: A few days ago, Turkey and the United States agreed on the creation of «security zones» in the north of Syria. The area of 100 km in length and 45 in width will be under the control of units of the Free Syrian Army. The stated objective of creating this zone is to prevent the infiltration of IS militants to Turkey from the Syrian territory.