Alexander Kolesnikov: The decision about the bombing of the Syrian territory was made in 40 seconds 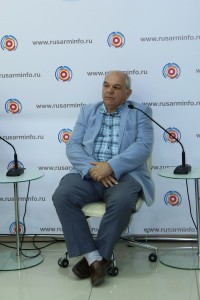 Alexander Kolesnikov: doctor of historical sciences, professor, head of the St. Petersburg regional information-analytical center RISI «Currently Turkey attacks not only the Kurdish bases, but also the Syrian facilities. The ground military operation is at hand. And this is a long-standing idea to the United States. If Turkey is fully involved in the war that involves the overthrow of Assad and destruction of Syria as an independent state, then the hands of Turkey will be released, and it will be difficult to stop it in future. 7 years ago Turkey discussed the possibility of a strike against Kurdish bases from the territory of Iraq for more than 4 months, and today the decision to bomb Syria was taken in the best case for 40 seconds.»

«Erdogan himself is a fighter, but after the parliamentary elections he has occurred in a difficult situation. It is not known what political combinations he will suggest. The attacks are only the beginning of a series of terrorist attacks that will give Erdogan a constitutional right to introduce a state of emergency. He may thus be able to achieve their political goals, and finally form a government. The longer continues the chaos, and the more Turkey is drawn into the military situation, the easier it is to achieve the adoption of the necessary decisions to Erdogan.» The improvement of the Armenian-Turkish relations is not profitable for NATO

«Turkey is split in the political sense, that, among other issues, also affects the Armenian-Turkish relations. In Turkey, there are supporters of rapprochement with Armenia, they are now gaining ground, but there are also quite fierce opponents. The improvement of Armenian-Turkish relations is not in the interest of NATO, which fully controls the interior, foreign and military policy of Turkey. Do not forget how many NATO military bases on the territory of Turkey are. Turkey, the NATO’s southern outpost, is aimed primarily at Russia. From the high tribunes the representatives of NATO, especially the French, say exactly what the Armenians want to hear, but at closed meetings of NATO the line of non-rapprochement of Turkey and Armenia becomes clear.» The permission to build a nuclear power plant was received an hour before the arrival of Putin

The tense situation in Turkey will be injected, which will undoubtedly have a negative impact on the Russian-Turkish relations, which have been deteriorated lately. This is evidenced by the fact that from the five of the requested permits for the construction of nuclear power stations only one was received, and the four hour before the arrival of Putin to Turkey.