Главная / Без рубрики / «Stand up, Armenia” is still on the sedentary rally, but soon it will block the streets leading to the central square

«Stand up, Armenia” is still on the sedentary rally, but soon it will block the streets leading to the central square 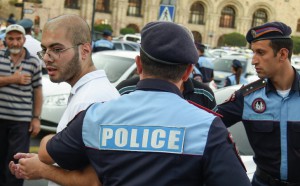 The members of the civil movement «Stand Up, Armenia», acting against the increase in electricity tariffs, are continuing their sedentary rally at the Republic Square in Yerevan, as reported to RUSARMINFO from the scene by David Sanasaryan, a member of the board of the civil movement “Stand Up, Armenia». Recall that the activists resumed their protest action on July 27. The Yerevan police forces did not allow the protesters to sit in the center of the area and advised to stay a little further, where once stood the statue of Lenin.

«We denied their request and a couple of times attempted to break into the center, which resulted in a traffic jam, and the traffic movement was blocked,» said Sanasaryan.

According to Sanasaryan, 30-40 people participated in the sedentary rally. 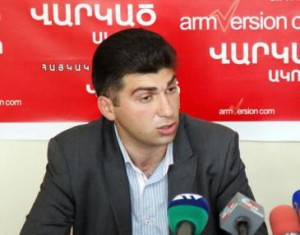 «Our goal is to mobilize and inform the public. Today again we will undertake attempts to break into the center of the area and, if necessary, will block the streets leading to the square,» the activist informed about further actions. As previously has reported RUSARMINFO, until July 30 the Yerevan picket will be joined by the activists from Vanadzor, Gyumri, Talin, Ashtarak. The day is not chosen by chance: on July 30 will be held the last session of the Armenian government before leaving for summer vacations.

Recall that the protests in Yerevan were provoked by the decision of the RA Commission on Regulation of Public Services to increase the electricity rates by 16% from August 1. The intensity of protests decreased after the Armenian authorities in order to ascertain the validity of the tariff increase proposed to conduct an independent audit of the CJSC «Armenian electric networks» (a subsidiary of INTER RAO).