RUSARMINFO press conference: the basketball potential of the Armenian diaspora

Ara Poghosyan — Vice president of Basketball Federation of Armenia, initiator of the Armenian national team in basketball. Currently lives in Moscow. Together with like-minded people, he initiated the establishment of the team with the aim to revive the interest in basketball in Armenia. For recruiting purposes Ara Poghosyan searches for basketball players of Armenian descent all over the world, inviting them to obtain citizenship of Armenia and in the scopes of the international competitions perform under the flag of the country.

«The project of the Armenian national team in basketball began to be implemented in 2011, when the team was gathered to participate in the European Championship for players under 18 years old. Four years ago, the team achieved the sixth position, and it was an incredible result. Then, for various reasons, the team disbanded, but now we have restored it. New players joined us, and we took part in the European Championships, finishing on the 12th place.»

Recall that the matches in the Division «B» of the European Championship were held in Hungary from July 9 — 19. In the first round, the team from Armenia won a victory over the Swiss national team with a score of 71:57, the second and third games were lost to the teams of Macedonia and Belarus, and in the fourth game Armenia with the score 81:55 won the team from Moldova. The performances of the Armenian team were led by the Russian expert Victor Uskov.

Mikael Poghosyan — a youth team player of Armenia, took part in the European Championship; studies at the Thiel Tomcats College, the U.S. «It was very pleasant to play for Armenia, listening to the Armenian anthem and wearing your own name on the Armenian uniform. I’m very pleased that our team was the first shot of the Armenian basketball.» 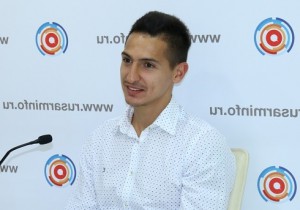 «My dream is to promote the Armenian basketball and pick it up to a decent standard. Unfortunately, we do not have enough time for preparations, but before the games, we will actively train.»

Artem Tavakalyan – an Armenian youth team player, studies in the United States and plays for the Delaver State.

«I want to become a professional basketball player since 15 years old. There, at the university, where I study, if you do not study, then you do not play, so still I have to study.»

The basketball potential of the Diaspora

According to the Vice-president of the Basketball Federation of Armenia, Ara Poghosyan, the basketball training system in Armenia is not working for various reasons. At the initiative of Poghosyan two years ago in Armenia were established free of charge basketball sections for children up to 6-7 years old: three sections opened in Yerevan, another — in Hrazdan. This is a special project that is not funded by the state. However, people have lost the habit and show no interest in sports. «If such sections were opened in Moscow, it would have formed huge queues of people willing to attend,» says Ara Poghosyan.

«Now most of all, we use the potential of the Armenian Diaspora of Russia,» says Poghosyan. «The cooperation with other Diasporas sometimes face the banal stereotypes: for example, the Lebanese Armenians have a kind of strange attitude to the Russian Armenians, they believe that all the Russian Armenians are KGB agents. The American Armenians, who have been living there for a long period of time, are too hard to go on contact. But those who moved to the U.S. after the 90s — easily go on contact, communicate with us, and maintain a close relationship.»