Главная / Без рубрики / Statistics: for what purpose, and in what quantity people arrive in Russia

Statistics: for what purpose, and in what quantity people arrive in Russia 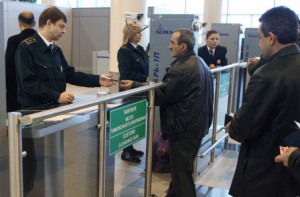 During the first quarter of 2015 Russia was visited by 203 thousand 656 Armenian citizens: 105 000 820 citizens described their visit as a business trip, more than 91 thousand pointed out that it’s a private visit, and 1,205 people arrived in Russia for vacations. The abovementioned figures were shared with the “RUSARMINFO” correspondent by Irina Turina, the Russian Union of Travel Industry press-secretary. The statistics show that the number of Armenian citizens coming to Russia increases. In the first quarter of 2015, more than 33 thousand Armenian citizens arrived in Russia compared to the same period in 2014. According to Rosstat, among the 25.4 million foreigners who visited Russia last year for tourism, the first place belongs to the citizens of Ukraine (8.4 million), the second place – Kazakhstan citizens (3.7 million), on third place are Poland nationals (1 , 8 million). The top ten of the countries, the nationals of which are visiting Russia quite frequently, also includes Finland (1.4 million), Uzbekistan (874 thousand), China (874 thousand), Azerbaijan (818 thousand), Moldova (618 thousand), Armenia (601 thousand) and Germany (548 thousand).