Turkish Police is against those, who are against the war in Syria

Recently, the representatives of the opposition Republican People’s Party of Turkey have organized a solidarity rally in Istanbul. The demonstrators expressed support for the Syrian people in the fight against terrorism supported from outside. 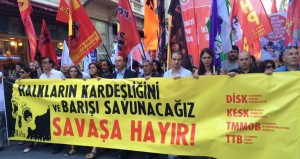 The protesters gathered in the square Kadi Coy and raised the Syrian and Turkish flags and posters with the following slogans: «Hands off Syria!», «No to the war in Syria!». Burkay Dozzha, a member of the district leadership of one of the youth organizations of Istanbul, stressed that «from the very beginning of the Syrian crisis, the leadership of Justice and Development Party (Turkish incumbent party — ed.) had been responsible for the penetration of extremists and mercenaries from Turkey to Syria.» The Turkish government severely inhibits the unwanted political activities and prevents such movements. According to the Syrian «SANA» state news agency, during another meeting against military intervention in Syria, held in one of the eastern provinces of Turkey, near the town of Çukurca, police dispersed the protesters and arrested 20 people. Against the demonstrators were used the tear gas, water cannons and rubber bullets. Note that the democratic forces, trade unions, civic associations of Turkey in the beginning of July also held in Istanbul a protest against Justice and Development Party’s consideration over the possible military intervention in Syria. Mustafa Kamalak, Chairman of the Turkish party «Saadat», warned that in case of the military intervention in Syria, Turkey would receive the fragmentation of its territory, and the aggression would «break its wings”.