Refugees are fleeing mostly to Russia

In 2014, about 275 thousand foreign citizens have turned to Russia with a request to provide an opportunity of refuge in the Russian territory from wars and persecutions. This is stated in the UN High Commissioner for Refugees (UNHCR) report, published on June 18 in Geneva.

Thus, the Russian Federation has become in 2014 the world’s largest hosting country in regards to the number of new applications. In previous years, the total number of requests for asylum addressed to Russia never exceeded 5,000. According to the report, the outbreak of the conflict in Ukraine had a decisive influence on this in 2014, as 271 200 requests for asylum and refugee status, or 99% of the total were addressed to the Russian authorities by the Ukrainian citizens, according to TASS. 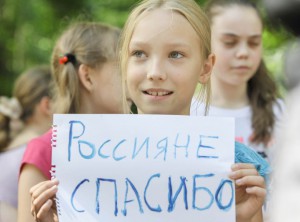 e requests of the Ukrainian citizens should be justified in more than 90%, in Poland, the UK, France, Belgium and Finland the figure didn’t exceed 10%. In Canada, the USA, Germany, Italy and the Czech Republic the figure varies from 35 to 65%. In general, the Ukrainian crisis has had a severe impact on the global statistics. In 2014, in total the UNHCR and the governments have registered 1,470,000 new individual requests in this regard. Almost one in five of these requests (288 600) came from citizens of Ukraine. In total, they were addressed in 67 countries.