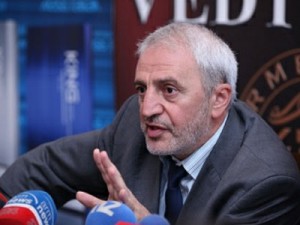 The increase of electricity tariffs in Armenia can be prevented only by the pressure of people, and even the incumbent Republican Party of Armenia has already said that in the current situation this is unfair and should not be tolerated. This opinion was delivered by Aram Manukyan, Secretary of the parliamentary fraction of the Armenian National Congress (ANC). «Today’s topic number one is the theme of electricity. And if citizens are able to do something, then the spark will come from theelectricity,» he said. Manukyan also expressed his belief that the rise in price of gas and electricity was in accord with the Armenian authorities. “The outrages of developments in the field of gas and electricity are coordinated with the authorities. This all is the result of thecollaborative arrangements with the authorities. And none should think that the «Electric Networks of Armenia» is a private company and adjusts its problems itself.  It is not so,» stressed Manukyan.