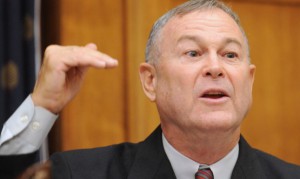 U.S. Congressman Dana Rohrabacher identifies another way of the possible Armenian-Azerbaijani cooperation. According to him, in the case of success of the «Islamic State» Armenia and Azerbaijan may become allies in the fight against terrorists. «I think that if the» Islamic state» continues to make progress capturing new territories and killing countless people, we will witness the creation of a new alliance, which will be the nations that have not been able to reach an agreement,» said the congressman.