Armenian, Russia and Georgia are finals of “Eurovision 2015” 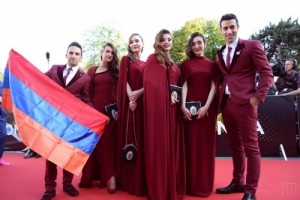 According to the results of the first semi-final, the Armenian “Genealogy” band with the song “Face the Shadow” was chosen for the finals of «Eurovision Song Contest 2015”.  Russia represented by Polina Gagarina and Gerogia – by Ninan Sublatti are also in the finals.   Note: Symbolizing the five continents and Armenia, the “Genealogy” band consists of Essaï Altounian from Europe, Tamar Kaprelian from America, Stephanie Topalian from Asia, Vahe Tilbian from Africa, Mary-Jean O’Doherty Vasmatzian from Australia, and Inga Arshakyan from Armenia. They are united by the blood in their veins, which contains Armenian genetics, and by music as the universal language of the world.