Guram Bablishvili: He must live and he will live. 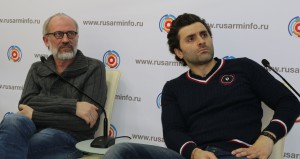 Actor Guram Bablishvili. All of us, who can help, should unite to rescue Vardan. Vardan – is a remarkable, kind, sympathetic, true devoted person. He must live and he will live. Now the small hole was formed on his way up. He stopped a little. Let’s join hands, raise him, and he will continue the way. Vardan Zilfugaryan work as a cameraman. He began his career on the Armenian television. In 2006 he moved to Moscow, and worked at «Mosfilm».  The numerous works of Vardan are – «The pilot of the international airlines», «Are you ordered a murder?», «Love», «Godfather», «Clever man», «Sasha + Dasha». Recently,  Vardan was diagnosed with  Acute myeloblastic leukemia. He already completed the first course of treatment.  Vardan will have a difficult operation  on a bone-marrow transplantation.  The desire to help Vardan can be carried out on the following requisites.