The representatives of The Federal Migration Service told about the procedure of long- and short-term stay and residence of Armenian citizens in the territory of the Russian Federation.

The Treaty of Accession of the Armenian Republic to the Eurasian Economic Union ( EAEC ) came into force on  January 2, 2015.According to the new laws the conditions of finding Armenian citizens in the Russian Federation and   the rules of employment have been changed. 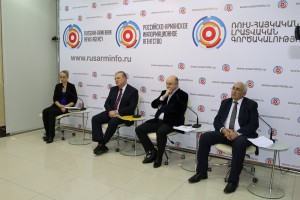 The Representatives of FMS of Russia also answered the questions of the Armenian lawyers about a procedure of removal of a ban on entrance for Armenian citizens, which are included in the list of the violators of migration regime.

The representatives of FMS emphasized that the entrance order on the territory of the Russian Federation for citizens of Armenia doesn’t change, except for the laws regulating the labor activity in Russia.

The Head of the Department of visa work and issuing invitations by foreign nationals Federal Migration Service Bychkov Nikolai  stressed, Armenian citizens don’t need to receive allowing documents for implementation of  employment — work permit or patent were disappeared. Work is carried out on the basis of the employment contract or civil contract.

In order to avoid further confusion, Armenian citizen who arrived in the territory of the Russian Federation with the purpose to find work, is obliged to specify the purpose of entrance in the migration card – work. In this case the citizen of Armenia is exempted from registration within 30 days. -The representative of FMS advised.

The Deputy Head of the Department for the organization of work with foreign nationals FMS-Nadezhda Voronina reported that the citizens of Armenia or their lawful representatives which appeared in the list of people to which entrance on the territory of the Russian Federation is forbidden, they can address to the government body which made the decision on a ban and for consideration of a question of removal of a ban on entrance into the Russian Federation. In this case all addresses are considered in an individual order.

According to her, the entrance about 22 000 citizens of Armenia wasn’t allowed in 2014. Thus nearly 4000 decisions were reconsidered, cancelled and solved positively.

The representatives of FMS officially declared, that the accompanying members of the labor migrant’s family have the same rights, as the migrant working in Russia on the basis of the employment contract.

Reference to RUSARMINFO is mandatory when making citations.